Map of Stony Coral Tissue Loss Disease recorded throughout the Caribbean – The SCTLD Tracking Map is an interactive map that shows where SCTLD has been confirmed in the Caribbean. Sightings are submitted through the Online SCTLD Survey Form which then appears on the map as purple markers while the information is being thoroughly reviewed. Once reviewed, the markers turn green if SCTLD is not present/confirmed or Red if presence of SCTLD is confirmed. Florida data is provided by FWC’s Florida Fish & Wildlife Research Institute.

To submit a sighting or survey in the Caribbean, please see the “Report Sightings of SCTLD” section of this page or contact us at info@agrra.org.

If your browser fails to download this map, we suggest you try another browser. For Mac users: use Safari with OS 10.14.1; Firefox or Chrome with OS 10.14.2

To cite or use this map in a report or publication: Kramer, P.R., Roth, L., and Lang, J. 2019. Map of Stony Coral Tissue Loss Disease Outbreak in the Caribbean. www.agrra.org. ArcGIS Online. [access date]. Check back frequently for updates.

Reef researchers, managers and sport divers should continue to be on the lookout for sites with an unusually high percentage of diseased and very recently dead corals. If you see see any instances of disease, please submit your findings via the survey form below. Thanks to everyone who has responded so far.

We have improved and simplified the survey forms into a Basic and Detailed form (see below for descriptions). New to the form is the ability to add data on Coral Bleaching. The main difference between the two forms is the Basic form is simple and includes estimates of corals affected, versus the detailed form allows actual coral colony counts and more site information.

All data are still shown on the SCTLD Tracking map above and the new coral bleach map (https://www.agrra.org/coral-bleaching/).  All information collected from previous surveys is still available in the map. Check out the videos for how to use the new forms. Any questions, please contact us at info@agrra.org. Thank you for contributing to this collaborative effort to monitor and protect Caribbean coral reefs.

This simple survey form allows you to enter presence/absence data on corals affected by SCTLD and bleaching by coral species and estimates of corals affected, photos and site information. You can identify survey method used such as rover diver, bar drop, general observation etc.

Watch this Video tutorial on the new Detailed Survey form. Click on image below.

If you have any questions related to diseased coral outbreaks please contact info@agrra.org

The Caribbean SCTLD Dashboard below provides summary information on the outbreak of SCTLD in the Caribbean and the regional efforts to respond to the disease. At the MPAConnect regional peer-to-peer learning exchange on SCTLD held in August 2019, Caribbean coral reef managers recommended the development of a regional dashboard to indicate the status of SCTLD and show the spread of the disease in the Caribbean. This dashboard is a direct response to that request. The dashboard was developed by AGRRA, in collaboration with MPAConnect, GCFI, and NOAA and is updated biweekly to monthly.

Bottom Left Map shows a time-lapse of how SCTLD has been reported to occur through the region.

To cite or use this dashboard in a report or publication: Roth, L., Kramer, P.R., Doyle, E., and O’Sullivan, C. 2020. Caribbean SCTLD Dashboard. www.agrra.org. ArcGIS Online. [access date]. Check back frequently for updates to the dashboard.

Many different coral species are susceptible to the stony coral tissue loss disease. This interactive map allows the user to view the coral cover (recorded in AGRRA benthic surveys) of these susceptible species in different groupings/layers including:

To cite or use this map in a report or publication: Kramer, P.R., Roth, L., and Lang, J. 2020. Map of Coral Cover of Susceptible Coral Species to SCTLD. www.agrra.org. ArcGIS Online. [access date]. Check back frequently for updates.

December 4, 2020: Florida Keys National Marine Sanctuary and the Office of National Marine Sanctuaries collaborate on a response to stony coral tissue loss disease. “As scientists and resource managers wage war on a highly lethal coral disease, rescued coral colonies in zoos and aquariums across the country are carefully being maintained, waiting for the time when they and their offspring can help restore Florida’s fragile coral reefs“.

This video gives a closer look at the SCTLD outbreak off the northern Caribbean region of the eastern Yucatan peninsula, Mexico. Researchers from UNAM’s Barcolab have been documenting its spatial extent and mortality since July 2018.

How is this disease different?

Which Corals Are Affected?

Highly Susceptible Species*: Early onset (the species first affected during an outbreak), with rapid progression, and total mortality ranging from one week for smaller colonies to complete mortality over 1-2 months for larger colonies. Typically, M. meandrites and D. stokesii are the first to become affected at a site, followed by C. natans, and then the others show disease signs shortly thereafter.

Intermediately and Low Susceptible Species: a comprehensive list of other species that are less susceptible are found on the Coral Disease Identification Page. *Information adapted from the Florida Disease Advisory Committee and Florida Department of Environmental Protection ﻿

How do I identify Stony Coral Tissue Loss Disease?

Move through this slideshow to see how to identify the appearance of Stony Coral Tissue Loss Disease (SCTLD) on susceptible corals in Florida. Slideshow provided by Karen Neely.

To view/download the complete slideshow in a PDF, click here. 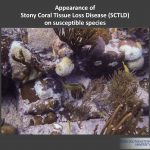 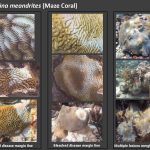 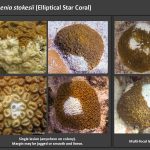 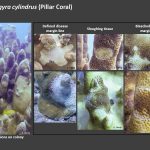 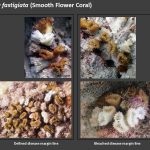 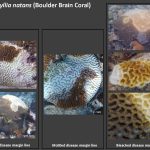 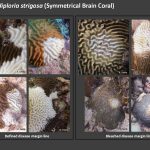 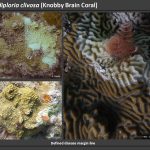 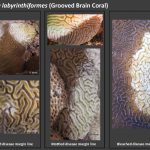 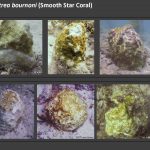 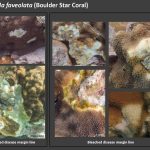 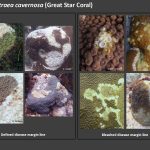 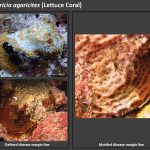 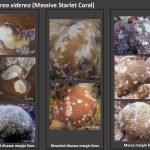 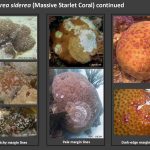 Where is this Occurring

See where this has already been reported.

See how the stages of disease affect the reef

Actions to monitor and prevent the spread of the disease

What You Can Do

Take these steps to help reduce the spread of the disease

See what resources are available