AGRRA database manager Ken Marks and scientist Dr. Judy Lang partnered with The Nature Conservancy and the University of the West Indies’ Port Royal Marine Laboratory to conduct an intensive, five-day training workshop on the AGRRA protocols and its online data-entry tool.

Attendees included a lecturer and a Ph.D. student in the Department of Life Sciences at the University of the West Indies, and six environmental scientists or consultants, each of whom focused on mastering at least two of the three (benthos, corals, fish) AGRRA protocols.

The training was made possible by the generous support of the American people through the United States Agency for International Development and its Caribbean Marine Biodiversity Program which conducts part of its activities in the Caribbean. 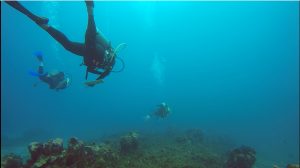 Starting a survey training dive on the Port Royal fore reef. Photo captured from a video by Rachel D’Silva. 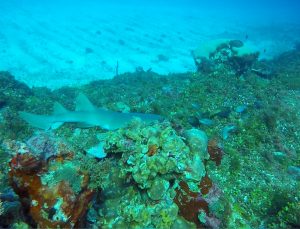 Nurse shark on a fore-reef spur off Port Royal. Photo captured from a video by Rachel D’Silva.

Thanks to some unusually calm weather, we were able to dive at several sites on the fore-reef spurs seaward of the Port Royal barrier reef, as well as at one of the offshore cays.