One of the key characteristics of the new Stony Coral Tissue Loss Disease is the high amount of recent mortality it causes. One sign to look for are reefs with numerous corals, especially highly susceptible species, that have recent mortality.

But What is Recent Mortality?

Corals are unique in that they can experience partial tissue death and still remain alive. As corals grow, they are exposed to disturbances like disease that can cause part of the colony to die although the rest of the colony continues to live. Corals have an amazing ability to regenerate new tissue over small areas of tissue loss, but if the extent or severity of mortality is too much, then the dead skeleton areas become overgrown by algae or other bioeroding organisms.

Is my coral healthy or not?

To better understand this, we look at how healthy a coral’s tissues are and measure the amount of healthy or partial mortality of a coral colony’s surface through visual observations.

Healthy Corals– Healthy corals have tissues intact with few signs of damage. Small corals often tend to have no or very low partial mortality, while larger colonies often have greater partial mortality (as a result of being exposed to more disturbances).

Recent tissue mortality – Recent coral mortality refers to when a coral’s tissue has recently died, but the underlying corallite skeletal structure is visible and identifiable to species. Recent “new” mortality appears white (having died in past minutes to days). Recent “transitional” recent mortality has corallite structures that are often covered with a thin layer of algae, sediment or bacteria (having died in previous days to months).

Old Mortality – Old mortality refers to any non-living parts of a coral in which the corallite structures are either gone or covered over by organisms that are not easily removed (e.g., algae, sponges). The coral’s soft tissues likely died within the previous months to years to decades.

Standing dead – Standing dead refers to colonies that are completely or 100% dead and identifiable to generic level based on colony morphology (e.g., Acropora) or corallite character (e.g., Diploria species). Although corals may be 100% dead, they still provide important habitat for other reef creatures.

Coral Disease – Coral diseases, like SCTLD, are impairments to a coral’s normal condition and are a signal of stress. Diseases can cause partial tissue mortality, interfere with a coral’s ability to grow or reproduce and result in colony death. What causes coral diseases is not clear, but other disease outbreaks have been linked to stresses such as high sea surface temperatures, pollution and sedimentation. Diseases have caused widespread mortality of important reef-building species in the past (e.g., white band disease affecting acroporids).

Coral Bleaching – Coral bleaching results when the symbiotic zooxanthellae (single-celled algae) are released from the original host coral due to stress. The coral loses its pigment (color) when the zooxanthellae are expelled. Bleached tissue may appear white (translucent) or pale, but you can still see the polyp tissue above the skeleton.

See the stages of Coral Mortality in the AGRRA slide show below.

Use left & right arrows to move through the slides.

You may also download the PDF of this presentation. 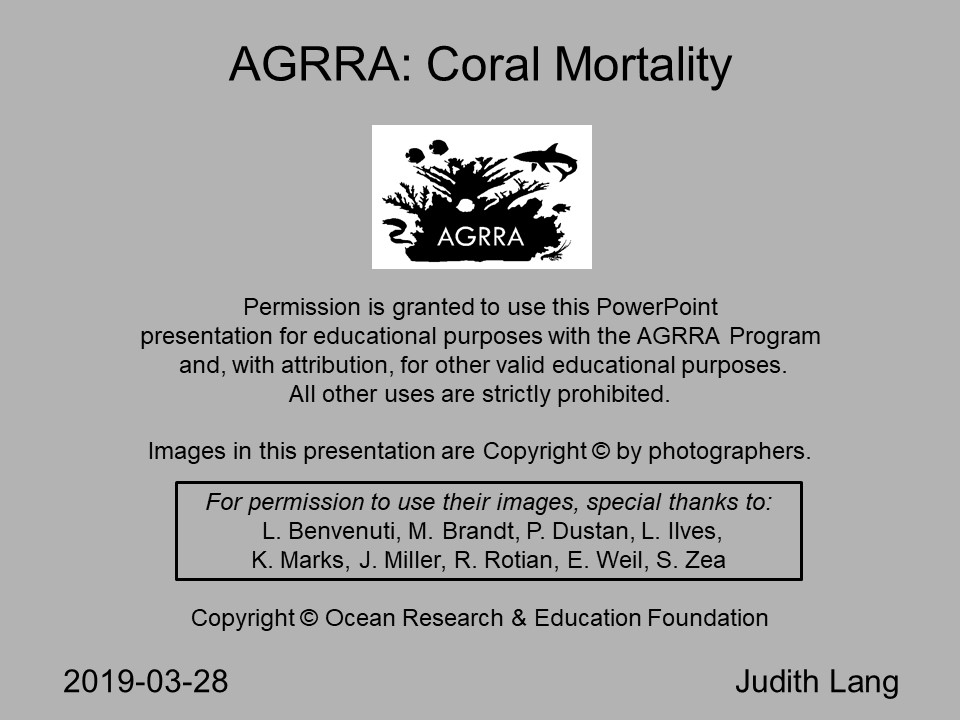 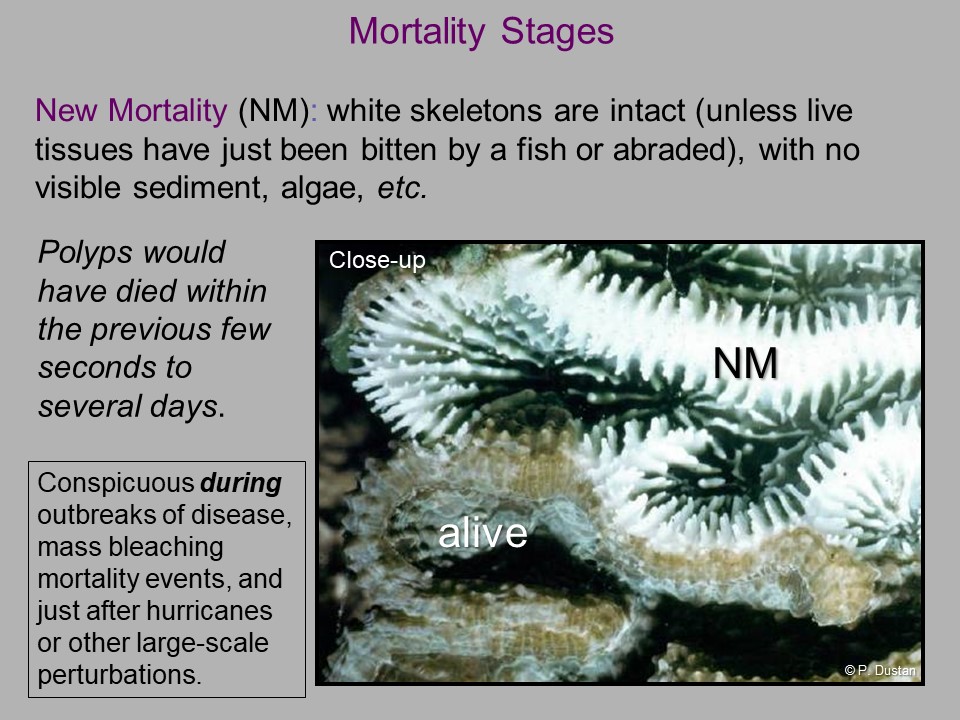 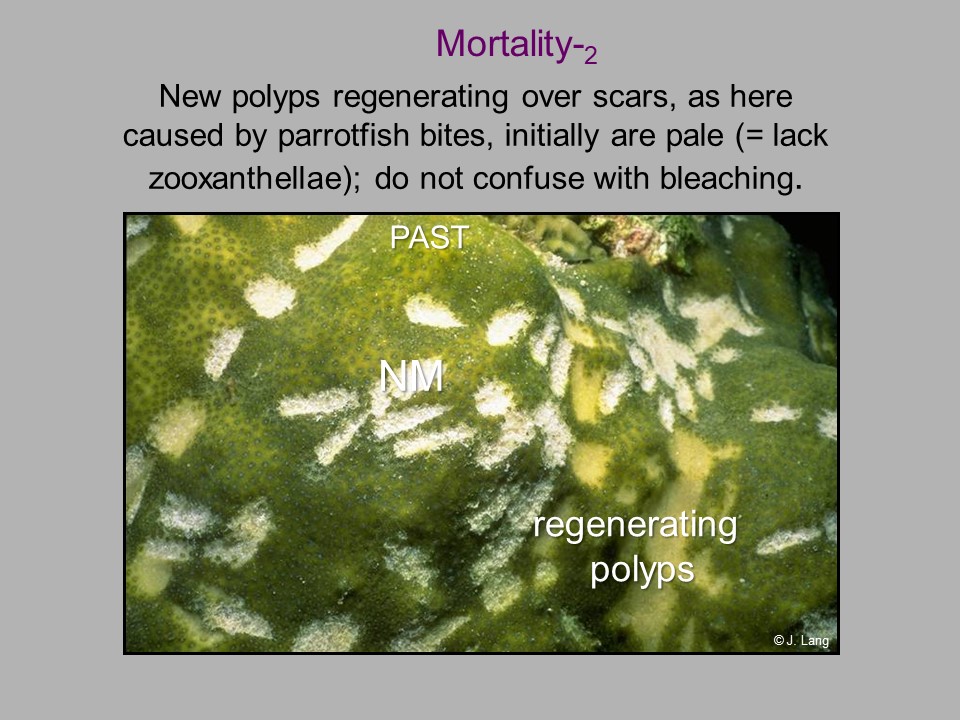 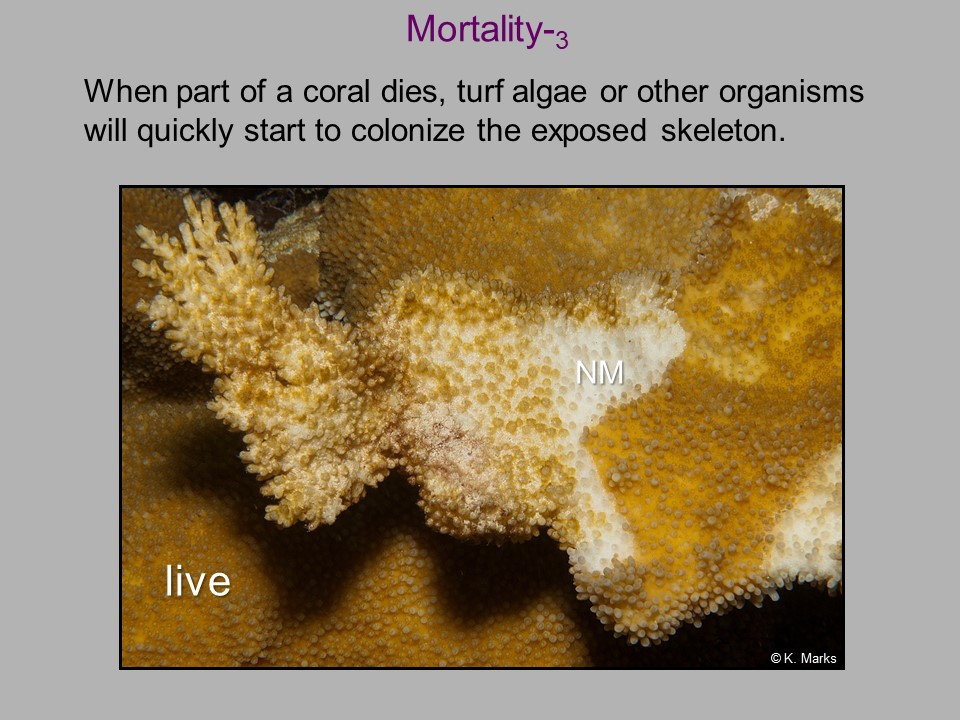 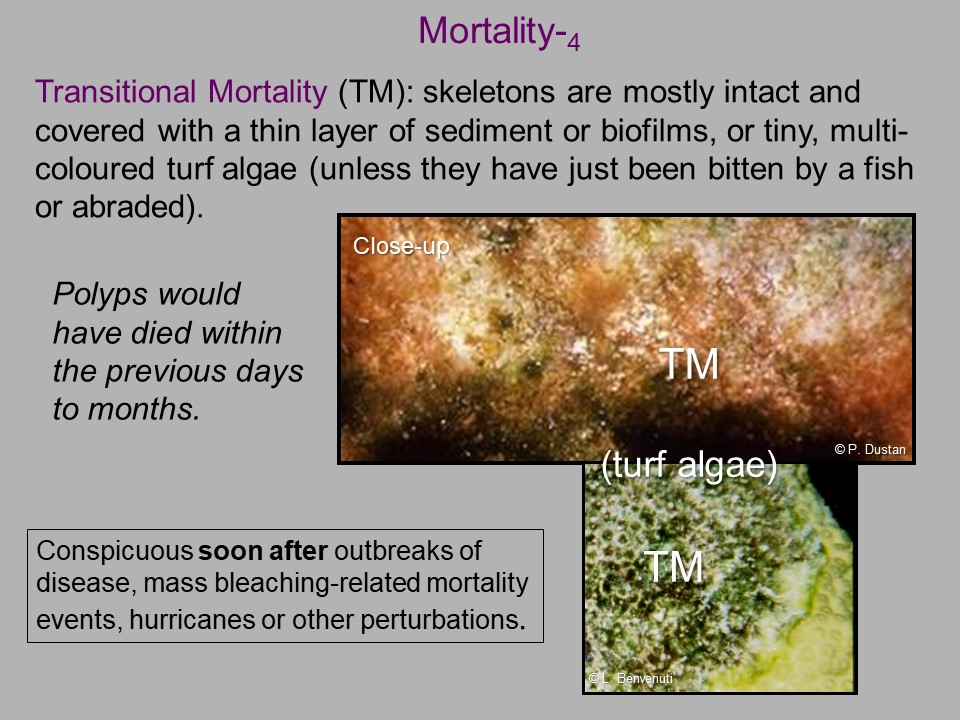 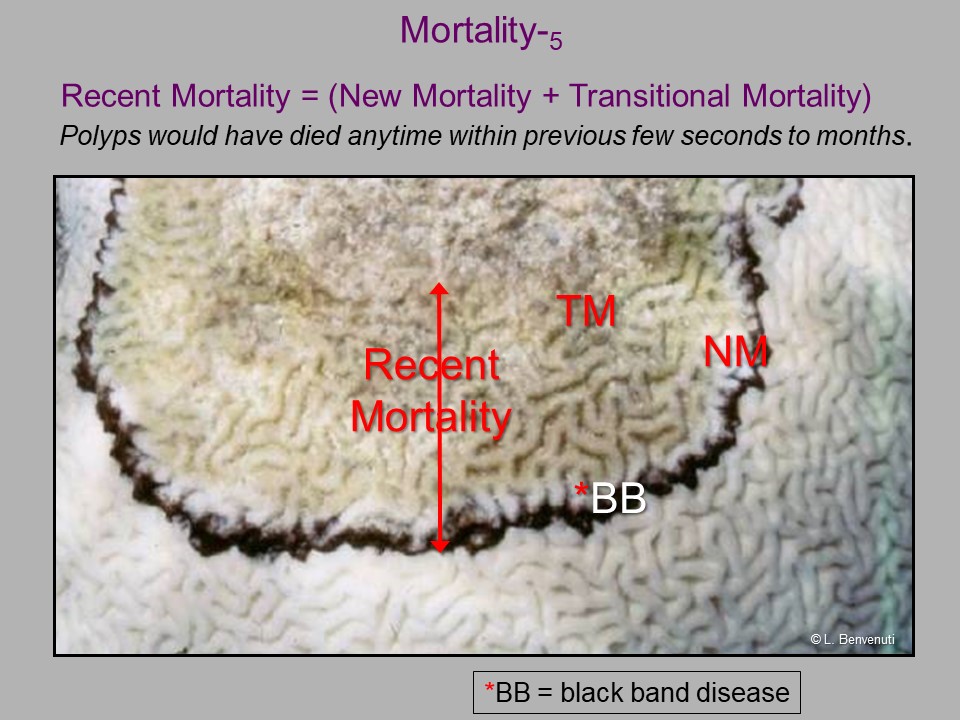 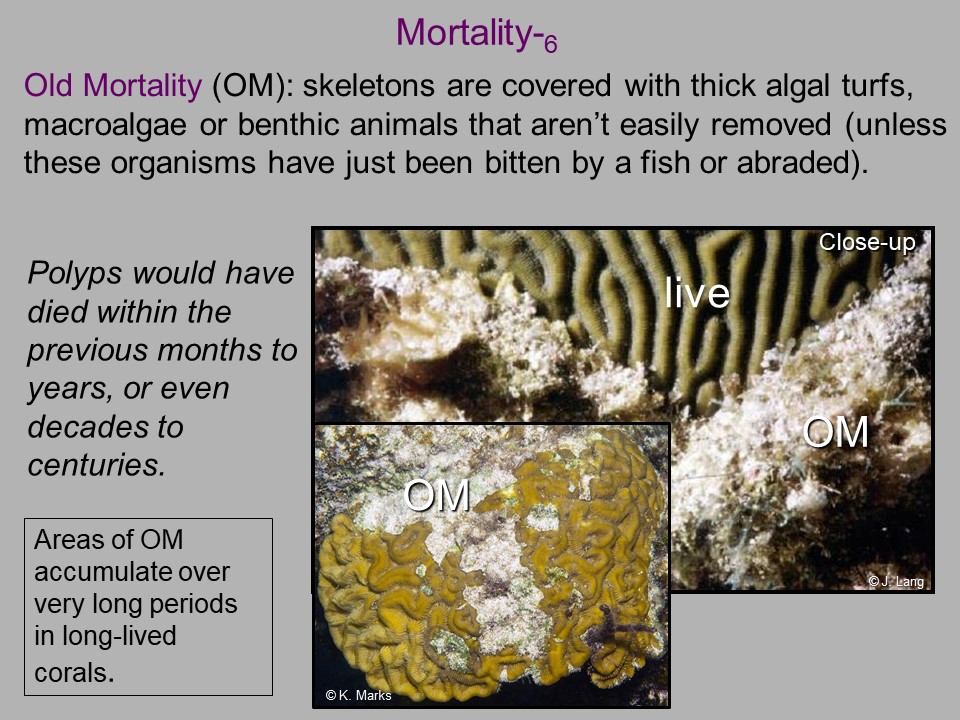 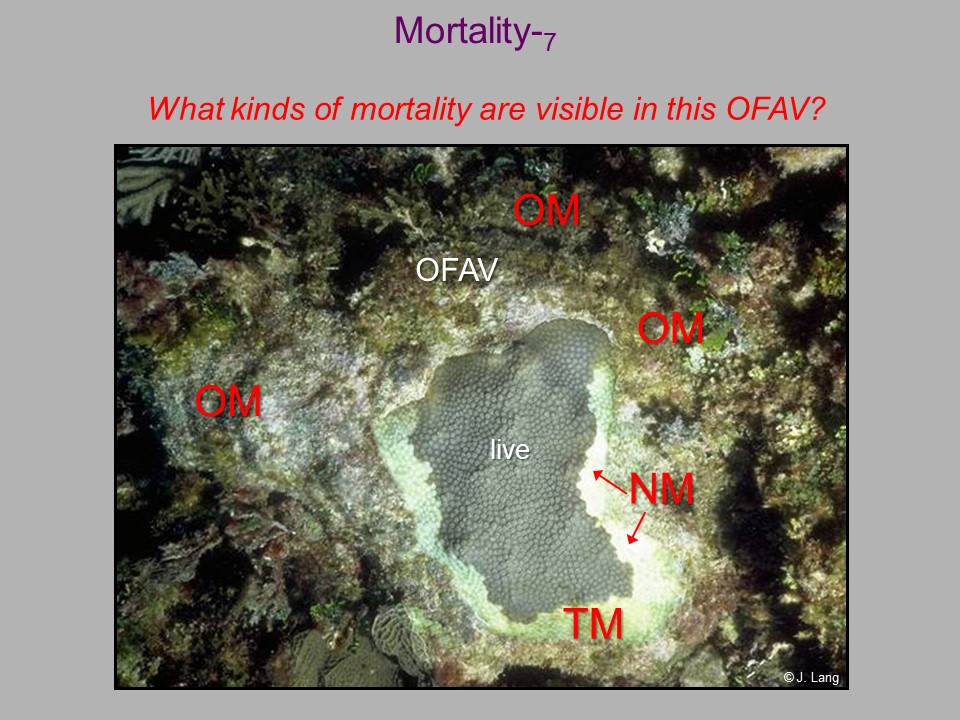 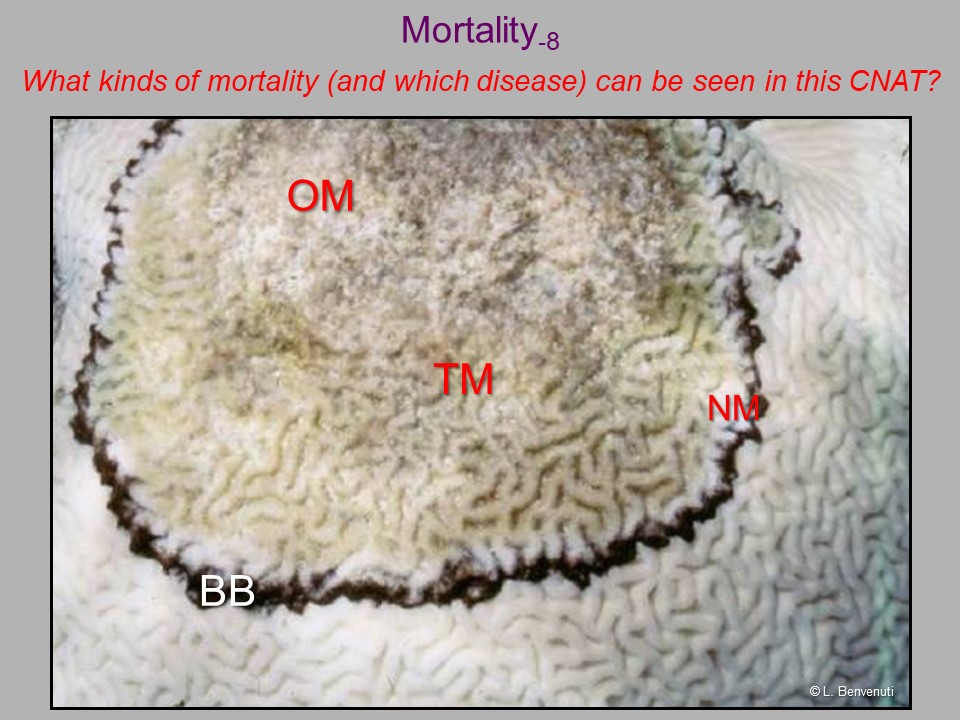 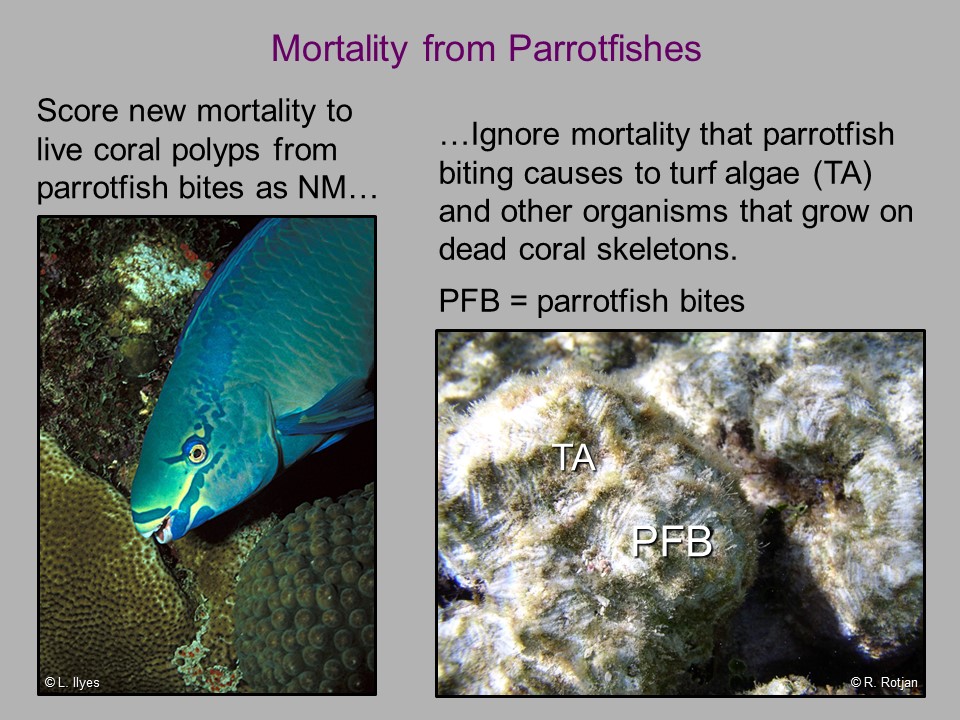 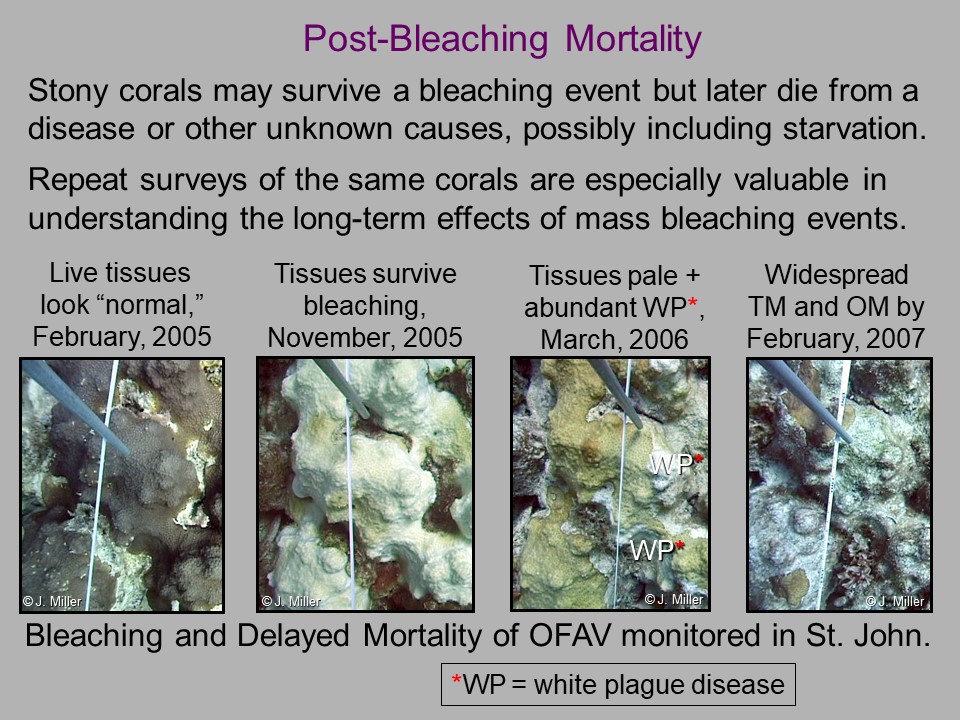 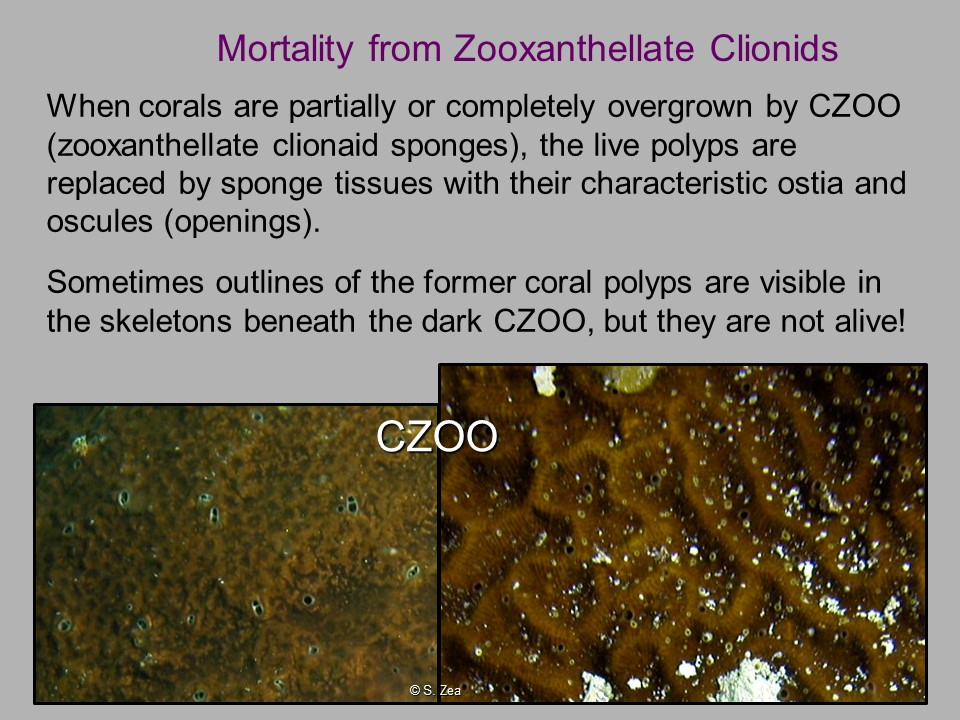 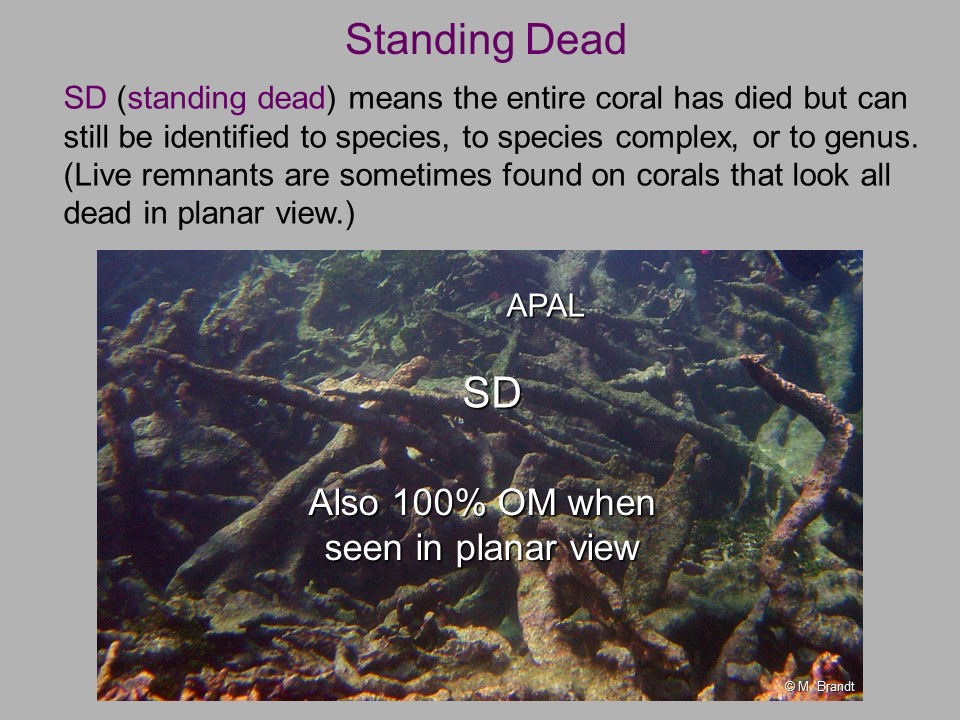